Absol is a quadrupedal, mammalian Pok?mon with a dark blue to black body covered in white fur. It has a ruff around its neck and chest and a tuft on the top of its head adorned with a single blue-black oval. Between the dark skin, the curvature of the white fur on its head, and positioning of its horn, Absol's face vaguely resembles a wu wei. It has a feline face with almond-shaped, red eyes, a scythe-like tail, and a crescent-shaped horn on the side of its head. Its broad feet are equipped with three claws each, and dewclaw-like spikes protrude from the heels of its hind legs and the elbows of its front legs. It walks with a pacing gait like that of a camel. 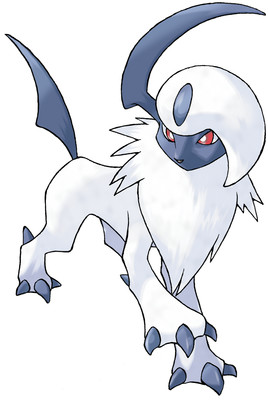